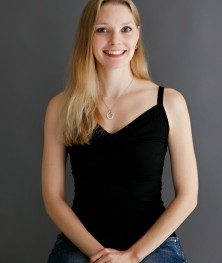 Alexis Dugdale, originally from Virginia, moved to Annapolis in 2004 to dance with Ballet Theatre of Maryland. As a classically trained ballet dancer she danced professionally for 10 years, dancing with such companies as the Richmond Ballet for 3 years; The Lexington Ballet for 3 years; and 4 more years in Annapolis, Maryland, finishing her career with the Ballet Theatre of Maryland in spring of 2008.

Alexis discovered Pilates at Evolutions in 2004. Pilates benefited Alexis in her career as a dancer. As she progressed in her Pilates training she became stronger, her balance improved and she felt more efficient in her movements. Having discovered the benefits of Pilates in her own body, she began the Power Pilates teaching certification in Annapolis in 2005. Alexis continued her education in New York City where she became a fully certified Power Pilates instructor.

In 2008 Alexis relocated to Windsor, England. While there she worked within a physical therapists office in Windsor as well as Pi Studios in London. In 2012 Alexis was invited to become a Power Pilates Teacher Trainer for the UK region.

In the summer of 2013 Alexis and her husband, Chris, welcomed a little girl, Lara, to the world. Now that she is back home in Annapolis she is looking forward to helping you make positive changes in your life as well as training apprentices in the Power Pilates program.